Book Review: He Speaks Our Language by Rob Douglas 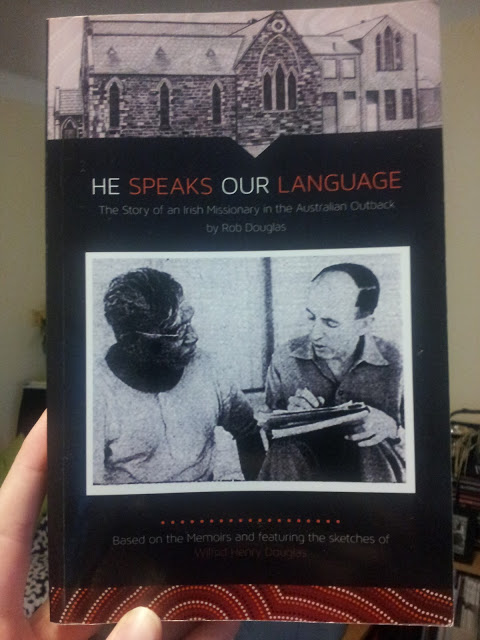 I recently finished reading this book and found it an inspiration to my own language learning motivation, so thought I would share a quick review on it.

The book is based on the memoirs of Wilfrid Douglas, who was a missionary to the Aboriginal people of Australia in the 20th Century. Now even as I write that sentence, I know full well that it is loaded with preconceptions and connotations of colonialism and oppression. But that is an issue for another day, another time.

I came hesitantly to this book with some of those preconceived notions in my mind. But that was taken away somewhat when I read about Wilf himself. Born in Ireland, he was shipped out to Australia ALONE by his family, and would NEVER see them again – he was only of primary school age. I recently heard a talk by a lady on dealing with children who have suffered trauma – I can only imagine the trauma Wilf experienced from that event alone – and then to be placed in a remote part of Western Australia…unimaginable.

Wilf, unlike others at the time, actually got to know the Aboriginal people as he went through life. He wanted to learn their language and, as a missionary, translate the Bible into their language, so they could have independence. His linguistic feats are still admired in many universities today. I was inspired about how he used learning languages to really connect with the Aboriginal people at that time and that they appreciated him so much more for this. It really inspires me to want to work on my Hindi ability, so I can build greater connections with my Indian family.

The way the book is written, however, leaves you wanting more. I found it a little difficult to follow at times, as occasionally it jumped time periods backwards and forwards. I realise it must have been hard to write the biography of Wilf based on memoirs (he has now passed away), but the story is so interesting that I wish it had more details – how did he feel in all of the situations he found himself in? What were the thoughts and experiences of the Aboriginal people he worked with? How did Wilf’s family cope with being trapsed all over the most remote parts of WA, and how did Wilf balance family life with his linguistic work? Did he ever fully recover from his early child experience of being shipped from Ireland?

I was also slightly disappointed that the biggest legacy of Wilf – his linguistic work, was really only gleaned over in the last couple of chapters. Perhaps the publishers thought the readers wouldn’t be interested in the details of the linguistic work, or that we could look up his university papers for more detail…but I think it would have been nice to include some of it – maybe even use it as an opportunity to teach us some of the Aboriginal languages he had learnt (even a couple of Appendix pages?)

In sum, Wilfrid Douglas’ story is definitely worth reading about – but be warned, it will spark an interest that will unfortunately leave your curiosity slightly unsatisfied. Yet I am grateful for his work, as I’m sure many others are, and that it is recorded to continue to be an inspiration.